LIFE IS FULL OF SECRETS.  THE SECRET TO A HAPPY MARRIAGE?

The secret to a happy marriage?  According to author John Adams that’s easy… just keep the person who has the opportunity to kill you in your sleep as happy as possible!

This is the first book of the hilariously brilliant Father & Son Secrets book series.  In book one of this four book series, the author shares funny heart-warming stories of family life and what father and sons get up to when moms aren’t around.  Men and women alike will see themselves in stories that ring true for any adult and will have you laughing out loud. 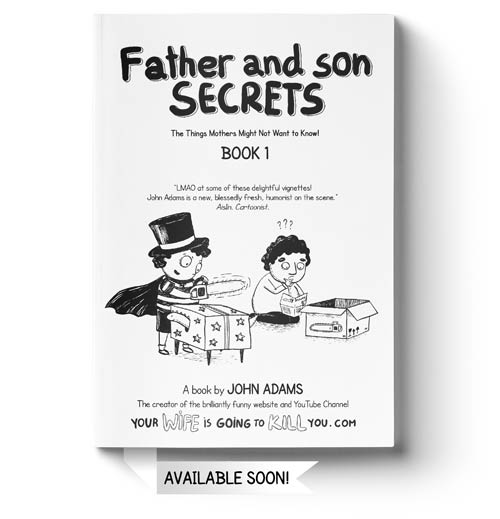 NOTE FROM THE AUTHOR:

In 2014, I wrote a quirky obituary for my cat that included zombies, a conversation with Saint Pete, batman costumes, and an epic immortal Highlander battle – I had no idea my little post would go viral or the impact it would have on my life.

In 2015, I began posting short vignettes, just little scripts I based on conversations with my then 5 year old son. My odd little take on the universe.

Having little understanding of security on my social media account, I had no idea the stories were open to the public. The response from audiences all over the world were overwhelmingly positive.

One day I received a call from an old friend who works in publishing.

He found the stories funny and liked the minimalist approach. He looked forward to the stories and connected with the characters. Surprisingly, I was told others did as well. He made me aware of the hundreds of comments my stories were generating across the internet.   “Your wife is going to kill you” - was number one.

So unbeknownst to me…the stories had a growing audience and I was encouraged to write a book.  Days later I had an agent.  Strange world....

Father & Son Secrets Book 1 is the first of the four book series. Each book consists of 50 conversations.

I try my best to present these conversations in such a way that almost any parent can identify with them and any woman with a good intentioned husband or boyfriend can sympathize.

Which reminds me - I should probably tell my wife this book is being published. Well…I should probably start by telling her I wrote a book....and she's in it. Hmm...she's in the animated movies too....that's not good. Crap...did I even tell her this website exists?  Don't remember...

Yes….I make my own adventures...

I hope you enjoy the stories.