We live in eastern Canada. A huge snow blizzard had started that evening. My son was excited.  He couldn’t wait for the morning radio announcement that his school was going to be closed.  That morning, I brought my cell phone into my son’s room so we could listen to the news.  I turned on my phone and selected a local radio station…in Florida.

Radio: “…and now over to the weather with Bill Jenkins…”

Radio: “…Put on your sunscreen folks…It’s going to be a scorcher…”

Radio: “…lots of sun this morning and not a cloud in the sky…”

Radio: “…and for all you parents driving your kids to school…you’ll need that air conditioner cranked all the way up…”

DOES YOUR PARTNER TRUST YOU WITH THE KIDS??

In this week's Movie Time, I tackle domestic life and ask the question; "Does your partner trust you with the kids?"

LIFE IS FULL OF SECRETS.  THE SECRET TO A HAPPY MARRIAGE?

The secret to a happy marriage?  According to author John Adams that’s easy… just keep the person who has the opportunity to kill you in your sleep as happy as possible!

This is the first book of the hilariously brilliant Father & Son Secrets book series. In book one of this four book series, the author shares funny heart-warming stories of family life and what father and sons get up to when moms aren’t around.  Men and women alike will see themselves in stories that ring true for any adult and will have you laughing out loud. 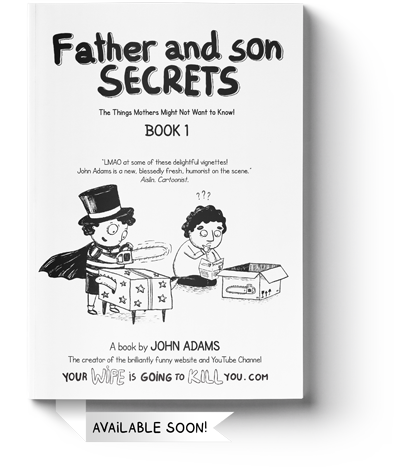 LMAO at some of these delightful vignettes! John Adams is a new, blessedly fresh, humorist on the scene.

When author John Adams wrote a quirky obituary for his cat that included zombies, a conversation with Saint Pete, batman costumes, and an epic immortal Highlander battle – he had no idea that the story would go viral or the impact it would have on his life.

When he followed up with a series of funny narratives based on his life with his wife and 7 year old son, the reaction from readers worldwide was unanimous…

“LMAO…and…your wife is going to kill you!”

John’s response?  “What a great name for a website!”

Your Wife is Going to Kill You.com was created in 2018.  The website and associated YouTube Channel is  based on John’s original narratives on married life, family relationships and creative parenting.  The popular and funny website interacts with its audience using both written stories and animated movies.  It's unique format provides fans of the site the chance to share their funny stories with the author which appear in future stories and short animated movies.